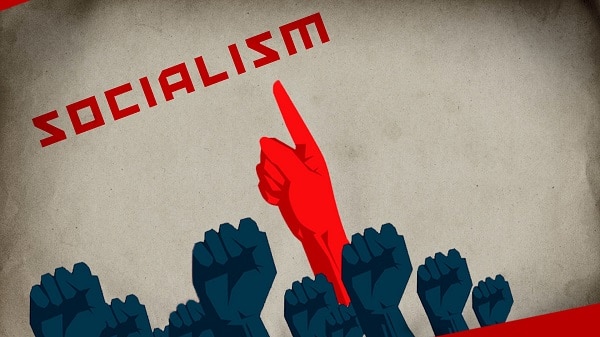 The ideals of socialism state the social and economic doctrine of public ownership than private ownership. The Indian Constitution solemnly resolve its people to constitute India into a Sovereign Socialist Republic Nation. The principle of socialism was added to the constitution through the 42nd amendment act during the emergency period. Indian socialism promotes social and economic welfare among people and prohibits exploitation in any manner.

India follows democratic socialism which has a blend of Marxism as well as Gandhian socialism and leans more towards Gandhian ideologies of Truth, Ahimsa, Trusteeship and Decentralization. During the pandemic, the services to the people were catered through the public health care system which is a true example of Indian socialism. The three major developmental aspects of Indian socialism are: 1) Rapid growth in industries and agriculture through which the Indian economy was developed 2) Public sphere contributing to the development of industries helping the nation to be self-dependent and 3) Mixed economy, to help people meet their needs with the help of private companies under a set of rules. Even though socialism in a nation accounts for social-economic development through social policies, land reform movements and cooperative policies, it has not yet fulfilled its objective.

Several policies from the liberalization policy of 1990 to the recent farm bills question the absence of public ownerships and raise criticisms for privatization. Discrimination and inequality is still a challenge in India. Socialism accounts for the upliftment of the marginalized sessions. Several people get denied their right to education, employment and faces mental and physical abuses. Senior citizen and Transgender are other categories who don’t get their rights served. We also spend a very little percentage of GDP in Public Health care causing a short of more than 3000 PHCs in the Nation. The Human Development Report state that we have only 8 beds for 10,000 people whereas China has around 40 beds for 10 000 people.

Through effective social policies and programmatic interventions, we are addressing several issues. For instance, the Elderly Inclusion programme of Kudumbashree promotes social inclusion among senior citizen in Kerala. The initiative of the National Institute of Defense along with the National Backward Class Finance and Development Corporation to allow relief funds to the trans genders during the pandemic and protecting them through Garima Greh promotes socialism in the nation. The discrimination against women is prevented by making laws strict through the Domestic Violence Act, 2005, Nirbhaya Act, 2013, Sexual harassment (Protection Prevention and Redressal ) Act, 2013 etc. The Bati Bacho Beti Padao Andolan, Mudra Scheme, Balika Samridhi Yojana ensure equality for women.

The aim of socialism is to enhance the well-being of the marginalized session and help them to meet their needs. By understanding the issues in the community, bringing effective planning and locality organization, through proper implementation and by periodic social audits, we could promote Indian Socialism.