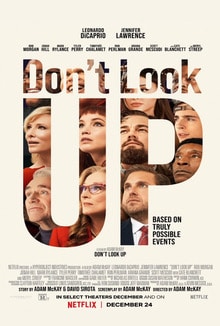 “Don’t Look Up” is the latest Hollywood movie released by Netflix, directed by Adam McKay. It stars Leonardo DiCaprio and Jennifer Lawrence in the lead roles as two astronomers who warn the World about a Comet which could hit the Earth and Destroy the entire planet. The movie emphasizes the conflict between politics and science when it comes to Apocalypse.

Why should one watch this movie?